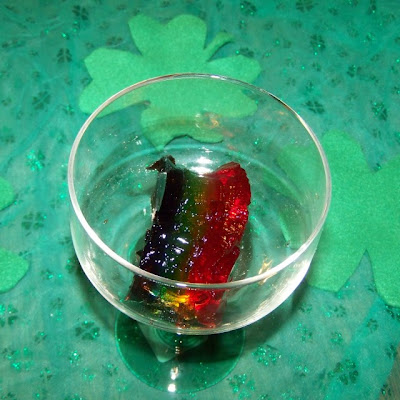 I made this to try to make St. Patrick's Day cheery and it was a pleasant surprise for Marv when I took a plastic container with two rainbows into the hospital in a clear plastic container and he said they were really good. Kyle liked them too, so double bonus points and this will be something I will make again in the future. This is not project that can be done at the last minute - you need to start at least a day in advance due to the 3 hour setting time between layers in the fridge. The basic recipe for Jigglers from the back of the box of Jello is: Stir 2 1/2 cups of boiling water (DO NOT ADD COLD WATER)into a 4 - 4 serving each size (3 oz box) and stir until dissolved. As these are being layered, and depending on the width you want the finished rainbows to be you could cut the recipe:
or
At Walgreens, I was able to get Royal Gelatin in Red, Green and Orange for 3 small boxes for $1. However, they didn't have yellow, blue or orange nor did the store brand. I ended up buying a small box each of yellow and blue Jello gelatin. For the purple I mixed a red box with a green box of Royal gelatin and added 10 drops of blue food coloring. 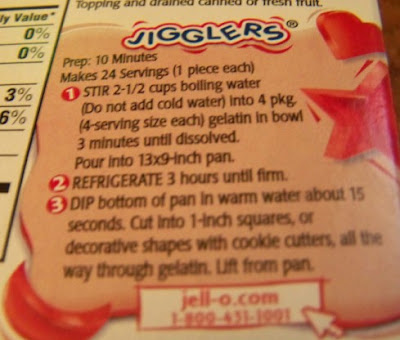 XXXXXXXXXXXXXXXXXXXXXXXXXXXXXXXXXXXXXXXXXXXXXXXXXXXXXXXX Work in Progress notes: I wanted to make something festive and different for St. Patrick's Day and put Rainbow Jello on my "Stuff to Make" list http://www.blogger.com/post-edit.g?logID=4451942305961742610&postID=4354616552539693420 and I decided to go with Jelly Jigglers instead of regular Jello Rainbow. The actual mixing the boiled water takes less than a minute - it is the set time of 3 hrs between layers which is what takes so long. As they had Royal Gelatin on sale a Walgreens this week 5/$1 with coupon, I am going to try to make due with the flavors/colors available, which was red, green and orange and use food coloring to tint the rest of the colors.
I started out with a box of Jello that I had and a box of Royal gelatin and reduced the water on each by 1/2 cup, boiled the water and added it to the gelatin. 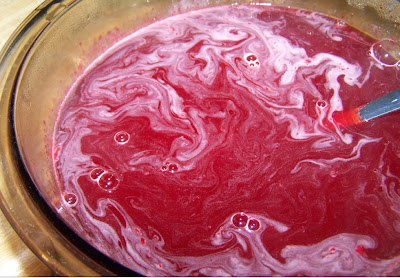 I used the cake topper from the cake that I bought and ate this weekend as I was depressed Kyle's Dad was in ICU at the hospital (don't judge me - Kyle did get one small piece) as a mold and poured the red gelatin in the mold.
I then placed it in the fridge overnight. 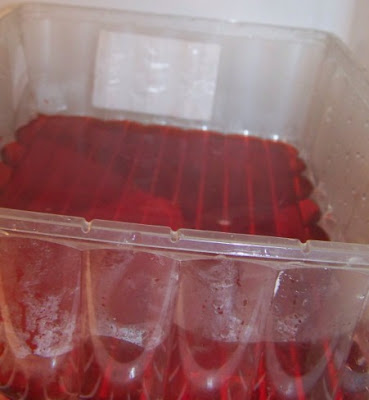 As I want the jigglers to be bite sized, it seems like two packages of each layer is going to make it too thick, so from here on out, decided to just make one package for each layer.
Mixed 1 1/2 cups boiling water in with the orange gelatin. 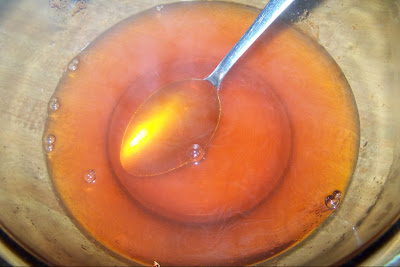 Poured the orange gelatin in the mold on top of the red layer. 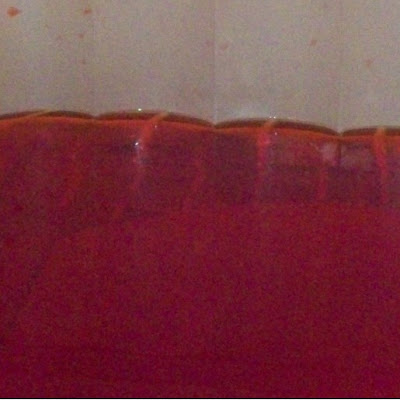 I next tried making the yellow layer with orange gelatin and yellow food coloring, but uh-oh - it turned it more of a darker orange than it did make it yellow. 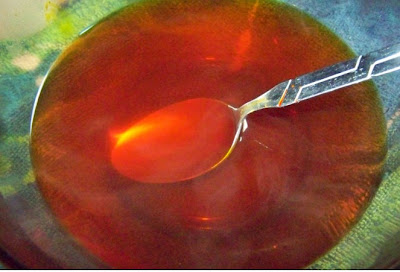 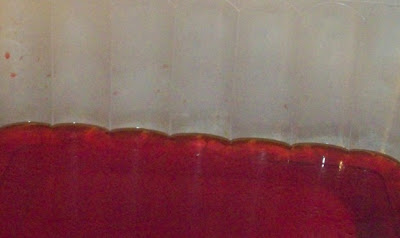 If I leave it as is, my rainbow will be out of whack, or I could invest a few more dollars and go to the store and call what I have the red and orange layer and then add yellow, green, blue and purple (2 small or 1 large box) to make it look right, but still concerned it will be too thick for finger foods.
As I will not have time to mess around with this until after coming back from the hospital this evening, I will think about this a bit.
I ended up on a compromise and bought a small pkg of yellow (lemon) and one of blue (berry) Jello and will mix the green and red that I have on hand to make some shade of purple. I checking at my local grocery I have found that while many brands offer red, orange and green gelatin, only Jello carries blue, yellow and purple.
Add boiling water into 1 sm. pkg lemon jello. 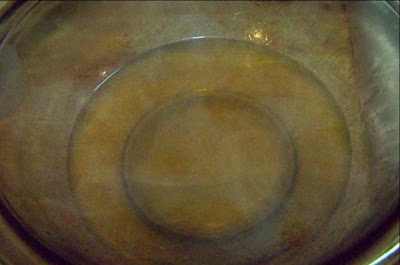 Pour the mixture into the pan. After seeing this I was glad I went ahead and invested in the lemon Jello as the contrast is greater and it does look better. Put it in the fridge and forgot about it for a few hours. 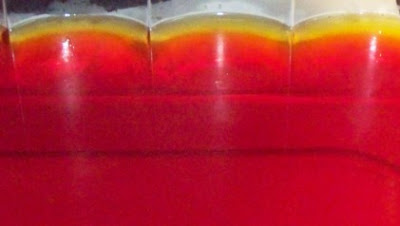 Next was the lime green layer. 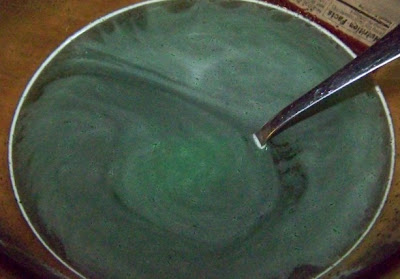 Pour the mixture into the pan and let set for a few hours.

Next was the blue layer. 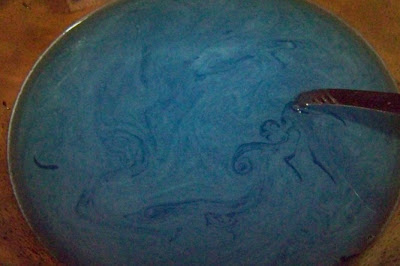 Pour the blue jello on top of the existing layers and put in the fridge for a few hours. 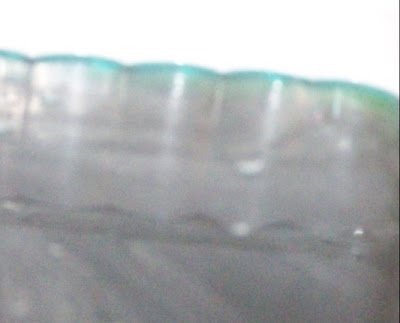 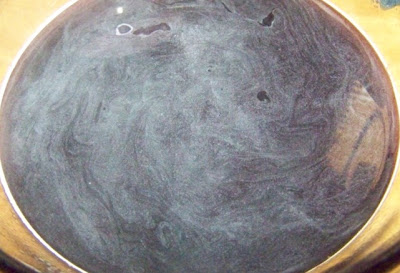 Pour into tray and let set for a few hours.
In reviewing the package of Jello, I may have added to much water for these to be jigglers as it indicated 2 1/2 cup boiling water to 4 small pkgs Jello and reducing the water by 1/2 cup might not be enough - and they may need to be refrigerated after all.
After last layer is firm, take out and cut the layers into circles with a cookie cutter or a cup (run the cup under warm water first). If you use a cup, this part would be super fun for kids as it makes a "thwack" when you pull the cup out and the layers slide back down in the pan. 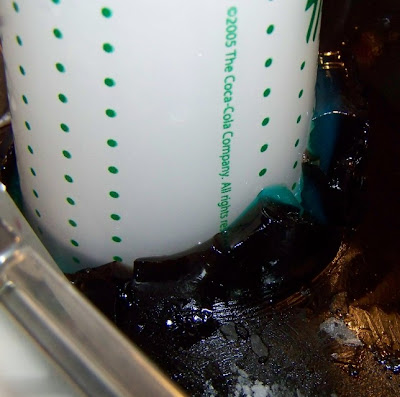 Next, remove the circle of layers from the pan an put it on a plate, then cut it in two with a knife. 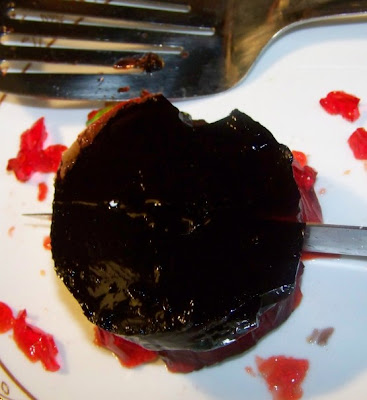 Set each piece upright and you have a rainbow!
Below are two rainbows side by side. 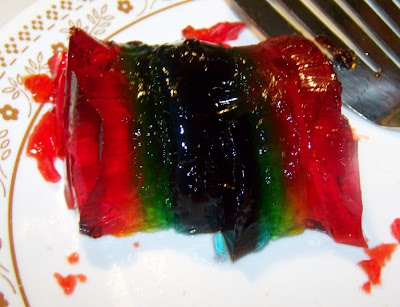 I am linking this up to

Click on the button to check out more St. Patrick's Day projects
Posted by Kathryn at 7:36 AM